From the outside, Vasylkiv is like any other small town in Ukraine. Founded in the 10th Century, destroyed by the mongols, today has a population 40 thousand.

For me, Vasylkiv was my favorite place to bike ride around Kyiv. The road is about 30km from the city, mostly in the forest, great hills and passes through tons of little villages where time has stopped. Despite being so close to Kyiv, you get a real look into the rural heart of Ukraine here rather than seeing Kyiv-satellite cities: cows standing in the middle of the road, people tending to their potatoes.

Hopping into a shop for a snack along the way also showed how quickly the culture changes, a few kilometers outside of Kyiv and the language switched to a local Ukrainian dialect rather than the urban Russian of Kyiv.

The countryside outside of Kyiv is filled with birds. My favorite were the big storks. 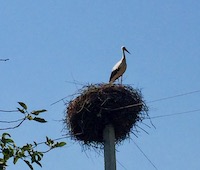 You also cross through visible layers of Kyiv’s history. The oldest are the Serpent’s Walls, an ancient fortification system dating from the 7th Century.

The defensive line of Kyiv from WWII runs through this route with a few pillboxes left standing. Another reminder of the war is the German cemetery (post in Russian, but lots of photos).

Vasylkiv had a dilapidated former synagogue, another stark monument to the German occupation. Among the surviving Jewish community, Jan Koum, found of WhatsApp, is from Fastiv, a city just a bit further along the same road.

Strangely enough, the jet that Brezhnev used somehow ended up on this road, parked in a field.

My friend Mark and I would do this ride together a few times each summer. We’d always finish it off with a stop at the same pizzeria in Vasylkiv, before we’d cycle on to the train station in Kalynivka to catch a ride back home. 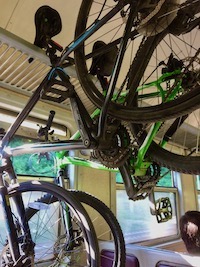 Mark liked the countryside so much around Vasylkiv, that he bought an old village house in the area. He and his partner are slowly restoring and rebuilding it. On my last weekend in Kyiv in 2021, I took a day trip out to visit them.

Today Vasylkiv is the site of airstrikes and fierce fighting over control of a nearby Ukrainian Air Force base. This is a good account of the toll on the local population.